as y'all know i'm a firm believer in using things that are tried and true rather than buying new stuff - with the exception of underpants. nothing will induce me to wear second-hand bloomers.

so when my son discovered a 1967 Landrover for sale i pricked up my ears. for expeditions to the bush i'm much happier in something that can be fixed with a piece of no.8 wire than something that requires its computer to be reprogrammed if the battery has gone flat.

rumour has it 90% of Landrovers ever built are still on the road; like the original VW they're a good basic piece of kit.[and yes i AM aware that some people think they need constant repair. i'm of the view that good maintenance and respectful use contribute substantially toward vehicle longevity]

so let me introduce Edgar 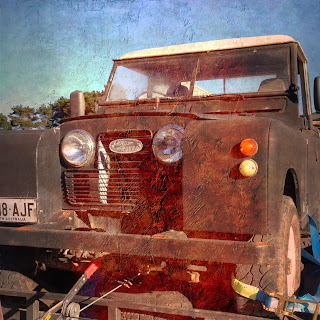 who used to greet me in the main street of Mount Pleasant with
"darling... how are you!"
and then pronounce to any hapless passer by "i've been in love with this woman for thirty years!"

a slight chronological exaggeration
but most warming to the heart
especially as his voice was rich and deep [imagine Leonard Cohen with a British accent]
i miss him.
[i missed his funeral too, by one day, returning too late from goodness knows where]

Edgar the Landrover's engine has just such a comforting rumble
and i bet Pa would be pleased...he had a soft spot for old Landrovers


finger-painting on the wall by india flint at 10:06

Email ThisBlogThis!Share to TwitterShare to FacebookShare to Pinterest
swingtags bliss on toast, born and bred in a brier patch, life, memory, not so much waste, wandering, worth