who knows where the time goes

it's been a while since I've published anything here , and the field of the year has been very thoroughly harrowed in the interim, beginning with the passing of my mother in February.
not something I am ready to write about yet. so I will not.

in May I travelled to Vancouver, to give my first two-week class at the Maiwa School of Textiles.


as Qantas only flies there direct in midwinter and midsummer, I had to travel via the United States.
in the past , my arrival at SFO has been met with a cheery "welcome to the United States".

I was accused of lying about my tattoos. seriously??? I have a tattoo of a maple leaf on my wrist. it was drawn by one of my daughters, based on a leaf gathered from under the beautiful Acer palmatum atropurpureum that lives at the foot of the Vallejo Steps in San Francisco. the officer asked me what the tattoo was, I responded with "it's a maple leaf, sir". whereupon he informed me that he was a patriot from Ohio who had seen plenty of maples in his time and that it was his duty to keep undesirable elements out of his country. and that he did not like to be lied to.

the officer continued to insist that it was a marijuana leaf (which, even if true, should not have mattered as Cannabis sativa is legal in California). he wanted the names and addresses of my friends in the US. he demanded to know if I were an activist or an environmentalist. I responded truthfully that I was a tree planter, then he sent me for "secondary questioning".  hours later I was released into the USA. if you want to know what those hours were like, read Mem Fox's account of her experience. it's quite similar, except that in my case there was no apology (and I haven't given any books to Prince George).

curiously, everyone else in that detention room was brown, too.


happily I had had the foresight to book my onward flight to Canada for the following day, otherwise I might well have missed my connection. but as a result of this experience, and given the current administration's attitude to aliens sharing their skills in the USA (although apparently it's ok to have your hats, handbags and suits made in China and Mexico) I shall not be teaching there again for the foreseeable future which is ironic, given the number of people who have set up small businesses churning out ecoprint textiles, teaching workshops and e-courses; none of which seemed to be around before Eco Colour was published. I like to think that I'm actually making a useful contribution and doing a bit of good around the whirled. I could just be misguided.

enough of the sad ranting. I'll miss all y'all.

now back to the story.

having two blocks of five days to work together, with a weekend off in between was just marvellous. I was there to teach feltmaking, of the kind that doesn't require truckloads of soap (but DOES need a bit of stitching and is a splendid means of using up little scraps of cloth. I call it shibusa), but there was of course lots of other dyeing on the side, including in a deliciously fragrant banana-based indigo vat. 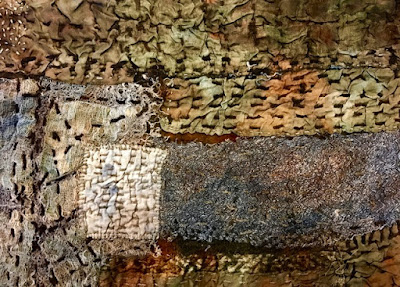 
we all found it a wrench to part company on the last day.
happily I've been invited back for next year and the class is in June, so I can fly directly to Vancouver from Sydney on my favourite airline. 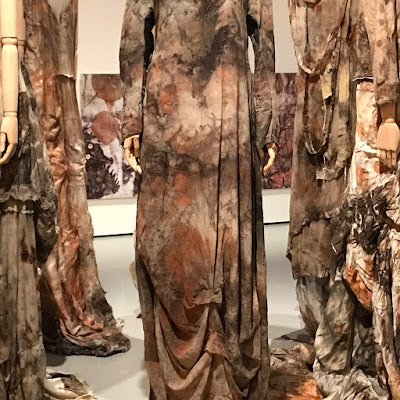 after a few other adventures, early June found me in the Netherlands, where I was included in the exhibition 'Earth Matters' at the Textile Museum in Tilburg.
at the opening I met Christina Kim (whose work appears below). I'd visited her Dosa space in Los Angeles a few years ago going to cross paths, but she'd been out of town at the time. I also met Birgitta deVos and acquired a copy of her gorgeous new book. 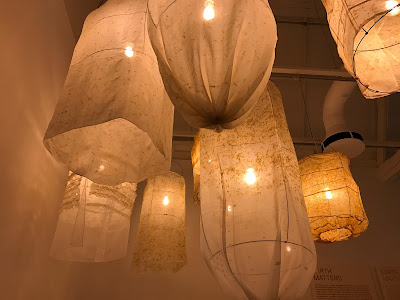 I am so very grateful to Iris de Voogd for organising a workshop at such short notice, which meant that my airfare was covered and I could attend the exhibition opening. also I had a chance to catch up with lots of people I had not seen for a long time, some (Geesje and Dorie) not since 2011.  Marijke (who joined me in Newburgh a few years ago) was there as well, and her daughter Caitlin (she's the one who led the singing in the riverbed) has woven me the most glorious scarf and given me permission to dye it! do stay tuned for developments on that front, we are now treating it as a collaboration!

anyways Iris and I had been having an extended email conversation for around two years about the possibility of having a class there and May 2018 had already been inked into place...but she enthusiastically leapt into action a whole 11 months earlier. (and even let me play her saxophone).

Dorie van Dijk's enormous studio amidst the flowerhouses is a fabulous place for a class. I'm already dreaming of a return, and Marijke has been kindly murmuring about organising something in her region too.

the seeds are planted, we'll see what blooms.

finger-painting on the wall by india flint at 15:40 31 comments: