to the 1393 folks who've stuck by this blog over the years.
a little over ten years, as it happens.

thank you for hanging in there.

this calendar year has been a particularly full one. I've taught five times in Australia, twice in Scotland and Canada,
once in New Zealand and once in France. that's eleven workshops. seven of them were a week (as in 5 days) long, three were three days, one was a mere seven hours and one ran over two weeks.

I made paper by hand during a brief residency at Richard de Bas papermill in France and spent time in New Orleans, dreaming up new work and collaborating with musician John Fohl.

I built a new website at a new address, and then bought back my old domain name from my former host so as not to lose all the goodwill that it had built up over the past ten years
and
somewhere in between I took a big swig from a cup of courage and
having previously resisted offers from others (the kind that read "come to our studio across the seas at your own expense, let us film you doing tricks and then we'll give you 5% of the profits") launched the School of Nomad Arts, which is giving me much delight.

I had no idea it would be so satisfying to make wee movies and create online classes.
now I know.

I'm writing this post from the beautiful gardens at Inverewe in Scotland, where I am spending the last week of November, dyeing with windfall leaves, preparing for an exhibition in their Sawyer Gallery (next June) and dreaming up more classes for my school.

unsurprisingly, the mirror tells me I'm looking a tad frayed.

it may be time for a wee rest.
time to go home, cuddle that gorgeous grandbaby and go wandering with my dog.

but it's been a fabulous year. 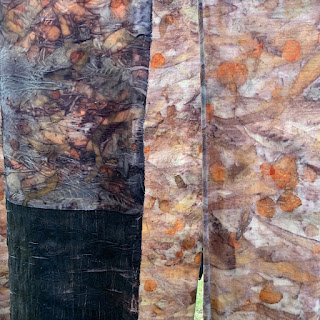 the week at Northcliffe, during which we spent all day each day outside in sunshine and in rain was absolutely glorious. we made a field trip to Mount Chudalup, and created an installation for 'understory', the local sculpture park. people worked on their laps or on the grass, stitching dyed pieces into a 'wayfarer's comforter', a big soft cloth to keep them safe and warm on their travels.

a mere two days at home to repack my bags, and I was off to Scotland to begin a three-and-a-bit-week road-and-ferry trip with  Alison Mountain (half of the team of two that make up Big Cat Textiles) . the plan was that Alison would cook for the first retreat (at Ardtornish Estate, near Lochaline) and I would captain the sailboat, and after that we would co-present a retreat on Orkney...meaning we would take turns at cooking and at telling stories. (we are nothing, if not optimistic) 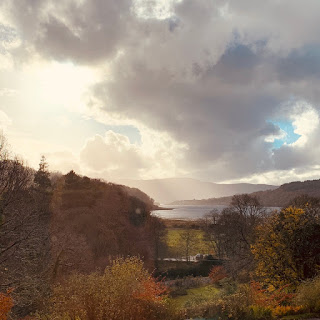 the lovely people at Ardtornish were so chuffed to have us, that we are already confirmed to return in 2020. the gardens there reminded me so much of my parents' lovely garden at Mount Lofty, before it was blackened by fire. and the house itself reminded me of Arthur's Seat, the towered house just a bit further up the mountain from us...where Nancy Harford taught me how to wash Persian carpets with velvet soap and a garden hose, introduced me to the joys of gin+tonic and told me the secret of everything... "whatever happens dearie, never lose your dignity".  I'll confess I'm not always good at keeping that in mind, but I do try. 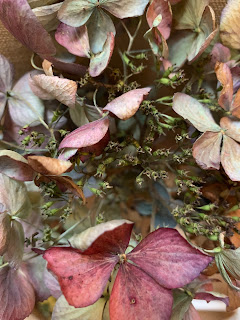 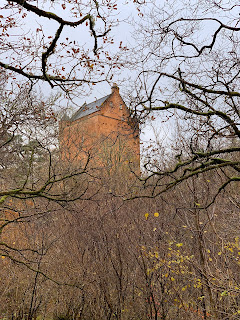 after five glorious days expecting at any moment to encounter the Dowager Countess Crawley and her withering words around a corner, we left Ardtornish behind us in the wee hours :: driving northward to catch a ferry to the charmingly named port of St Margaret's Hope, Orkney. it was a magical sail across to this gorgeous archipelago, arriving in time for a brilliant sunset. the next day was taken up with serious (double-trolley) food shopping in preparation for the arrival of our participants.

and so began a week of 13 hour working days, beginning with the morning porridge prep and concluding after the last dessert plate had been cleared. happily we had a cheerie helper (a rare luxury) who smiled through piles of plates and wrangled the ancient dishwasher into submission.

when she isn't disguising herself as a dishie on a far-flung island, she actually runs a clothing company. (and lest the reader thinks I've begun taking interns in return for dishes, no. I have not. both the shared workshop and the assistance will remain unique events. no applications will be received!!)
if you'd like to know more about the actual class...Jane Wheeler has described it in great detail.

and now I'm in my last week here, boiling up a cauldron at the Inverewe Gardens. I came here with the intent of focussing on the eucalypts, but the story seems to be changing as windfalls drift on to my path, squirrels skip across it and herons soar gracefully overhead.

next year holds four in-person workshops, three solo exhibitions and a number of research trips planned to add depth to the classes I offer online. thank you for your support, whether you've come to a workshop, joined an online class, bought one of my books or simply taken the trouble to sit down and wade through this blog.

let the season of twinkle-lights begin!!

finger-painting on the wall by india flint at 01:15 8 comments: