do you know the way through San Jose?

suspect the San Jose of the song to have little to do with the town of that name in California, but a little poetic license never did any harm...

during my travels last week i had occasion to spend a day in San Jose. the reasons why aren't important.

for 6 hours i wandered about, discovered architectural gems and was told stories by all sorts of people. here's one of them... 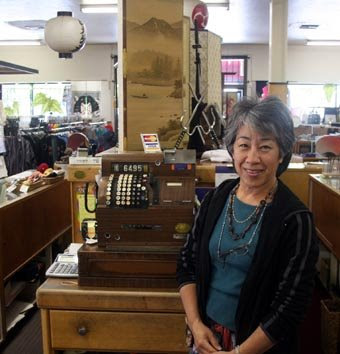 this is Arlene Tatsuno Damron, whose grandfather founded the Nichi Bei Bussan store. i went there in search of some Japanese silk as i was missing the dyepots and needed cloth. you can read the full history of the store here. it's worth a visit.

we discussed second-hand kimono and Arlene told me how they handle that. when the elderly Japanese in the district began 'downsizing' they were simply handing their precious kimono and fabrics to the thrift stores (because they either didn't have families or their families weren't interested) and the precious fragments were being snapped up for tuppence-hapenny (or whatever the American equivalent is). On Arlene's advice, the charities now bring the treasures to Nichi Bei Bussan, where they are sold on commission for what they are really worth. everybody benefits, the store gets commission, the charity wins bigtime and the giver has their clear space and the knowledge their gift has done some good.

what struck me particularly was a bit of homespun philosophy she offered me. she'd been trying to help a friend who was feeling down, typical story...loss of job, crumble of marriage, feelings of worthlessness. Arlene showed her friend a Japanese sword she kept in the store, and asked him if he knew how the sword was made.
she pointed out the blade went through fire and beatings and foldings (i.e. a generally tough time) before being honed and decorated to become a finished exquisite and dangerous object...not a bad analogy, i thought. 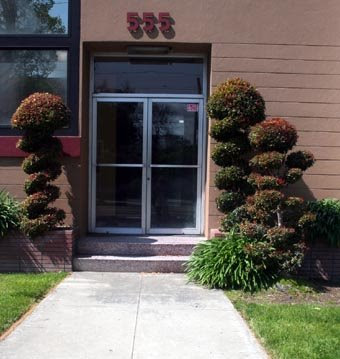 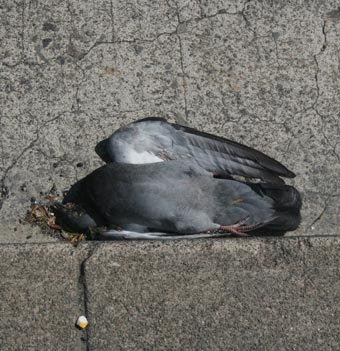 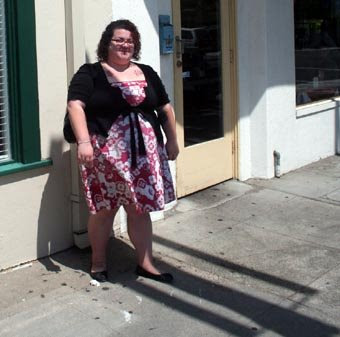 and finally a person i met in the street, who was wearing the most delightful sakura-blossom dress...
finger-painting on the wall by india flint at 19:08 2 comments: 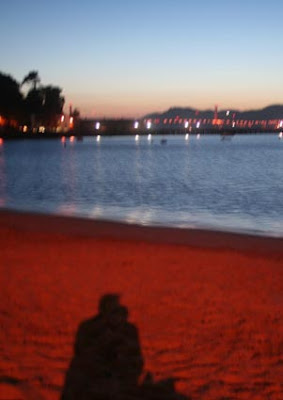 the beauty of modern communicatory devices is that one can wander the whirled with batfone in pocket (as opposed to being an obvious and complete git, simply seeing one's journey through a donkey-sized lens all the time).

it can be whipped out for unobtrusive and grainy happy snaps...the box brownie of our times 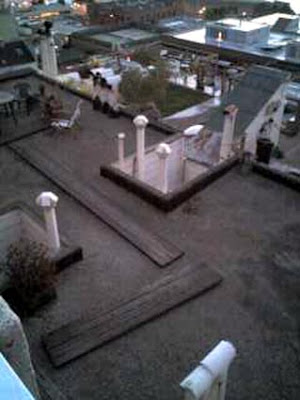 San Francisco remains one of my favourite cities. good postcards stored in mental pix file...self-important pigeons clustered on top of a warm air vent in the pavement, looking rather like tubby German businessmen waiting for a tour bus

sunset on the Bay, dodging the waves, soaking a silk dress in seawater, a pre-mordant for whatever comes next as it begins its journey to Denmark via much needle stabbing and colour soaking

Bombay Sapphire on the terrace, watching the boats chug past and the last parrot swoops of the evening on the side of Telegraph Hill. fragrance of roses, lilacs, wisteria and jasmine wafting up from the secret gardens on Filbert steps 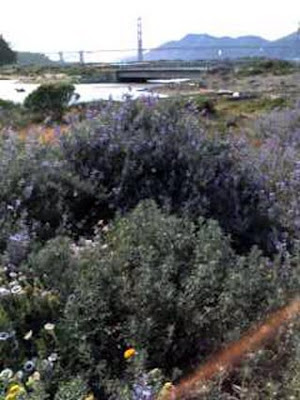 standing on a greensward in Crissy Field, with the sharp scent of the Yerba Buena spiking up from the earth.

four-weeks running those hills and i'd be sylph-like.
finger-painting on the wall by india flint at 23:34 5 comments:

waterholes in the sunshine 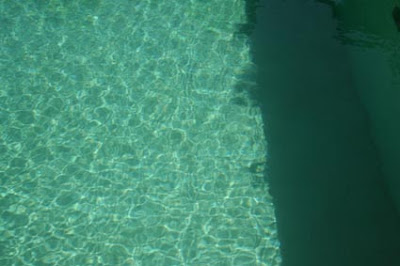 washed up on the far side of the Big Puddle and finding echoes of Hockney's cast paper pool series in luxurious sunsparkling water, a far cry from the cracked and empty dams at home...
finger-painting on the wall by india flint at 15:11 3 comments: 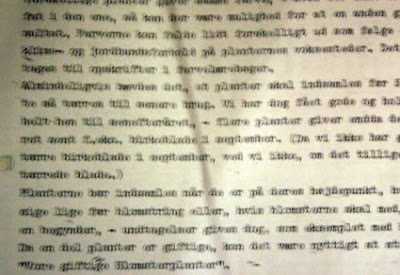 on packing up 'watermarks' yesterday i was given a surprise parcel which had been delivered to the space for me...i'll spare you the long story of where's and whyfore's, and cut to the chase. the bag contained several lovely Asian textile fragments (Japanese. Thai and Indonesian by the looks of them), a number of books on natural dyeing (among them Hetty Wickens' excellent 1986 book 'Natural Dyes for Spinners and Weavers ' that had so far eluded capture) and last but not least a large folder full of natural dye samples made in Denmark (Europe, not Western Australia) in 1974.

while many of the plant names (ahorn, birke, krap) can be deduced from a knowledge of German/English/Latvian it does seem that the universe is suggesting it is time to add Danish to the list of languages i can 'get into trouble' in...especially seeing as i will be exhibiting there with my friend Anette in the northern autumn next year.
ah well, i once heard a health expert propound the theory that for a long and healthy life one should drink red wine, eat dark chocolate, make love regularly, reject the elevator and learn something new every day...
a new day dawns 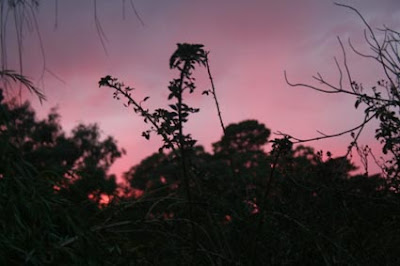 finger-painting on the wall by india flint at 22:24 7 comments:

the nearest pseudo-urban area to our farm is a small hamlet optimistically named Mount Pleasant. driving through it today en route to the wide whirled i was moved to muse upon certain ironical things. we are blessed with two financial institutions. in recent years each one has been held up (ie robbed) by a person whose getaway was made with the help of a velocipede. which of course led to the appellation 'bicycle bandit'.
after the second (successful) robbery it was decreed that both banks would have security guards stationed outside. in the early days of their appointment they stood, alert at their posts, glaring at those who had the audacity to leave their sunglasses on whilst entering the counting house (presumably sunglasses are considered a potential disguise).
some months into their tenure they introduced little folding chairs, to save the strain on their legs. the introduction of seating arrangements naturally called for reading material, so it didn't take long for a book or two to sneak out of the back pocket. today i noted with some amusement that some of the personnel ostensibly on watch have now improved the quality of their open-air lives by plugging their ears into what i presume is a portable sound system.
should they combine these with the reading of a book whilst comfortably ensconced in their folding chairs i expect the only deterrent to the next robbery will be the potential for impeding the escape of said criminal by accidentally tripping them up. in which case the robber will probably sue the financial institution (or the security company) for damages.
finger-painting on the wall by india flint at 20:09 2 comments:

Email ThisBlogThis!Share to TwitterShare to FacebookShare to Pinterest
swingtags musing 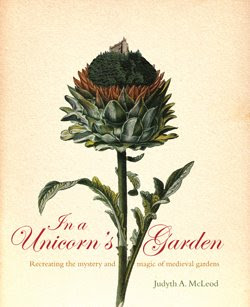 today's mail brings the joy of books in bulk...Weeds of New Zealand, Medicines of the Maori and an exquisite catalogue from Cecilia Heffer (UTS) entitled 'Lace' discussing her recent work in that field (mind you I'm still haunting the letterbox for Viggo Mortensen's "Skovbo"). This adds to the stack of bedside reading which also includes 'In a Unicorn's Garden' by Judyth A. McLeod kindly sent me by my very own publisher, Murdoch Books.

Leaping Puck-like between such disparate themes as the Crusades, the Herber, lists of edible plants, Hildegard von Bingen's curious recipes using Unicorn body parts and French tapestries...the book has as its common theme the delightful gardens of the middle ages and their floral residents. At first I was a little confused by the dancing and dodging between subjects and then I realised this was the perfect book for 'dipping into' and getting a wee taste of some fascinating aspect. In any event I'm now somewhat reluctant to criticise book structure, being an author myself and having an understanding of just how much effort is involved in actually creating something with hard covers that is perfect for taking to bed with a cup of tea. Which 'In a Unicorn's Garden' undoubtedly is...if I hadn't been given it, I would be out there buying it....
postscript : after reading a comment about the cover design i skipped to the 'credits' page of the book illustrated above...and found to my delight that my friend (and former felt-making student) Toyoko Sugiwaka had designed the cover...
finger-painting on the wall by india flint at 19:51 7 comments:

some friends on the paddock 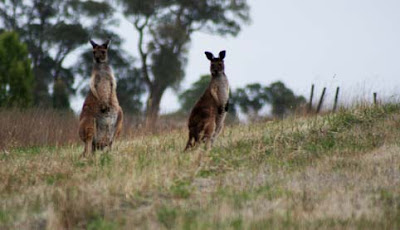 finger-painting on the wall by india flint at 13:47 5 comments:

Email ThisBlogThis!Share to TwitterShare to FacebookShare to Pinterest
swingtags pictures

grandfather disappeared on New Year's Eve, 1940 and it wasn't until some while later that the family knew he was still alive, let alone had been sent on an extended holiday to Siberia by the Soviets. small surprise, then, that grandmother left Latvia on the last train out (three children clinging to her skirts and laden with her portable sewing machine) when the Germans were leaving in 1944, running from the returning bear. that her brother had been executed by the Russians in 1938 may also have tipped the balance.

so with this background history the book i am reading at present 'the silencing' (available from Perceval Press) carries particular weight. this book graphically depicts journalism and the fates of the outspoken in post-glasnost Russia. illustrated by stark images of the places in which the subjects of the book were 'eliminated' it discusses the tragedy of contemporary media as 'informational weapon' and the disappearance of truth along with those who dared to publish it.

John Howard's Australia was already beginning to slip quietly down this path in terms of interning suspect persons...and I haven't yet heard anything about Saint Kevin repealling the legislation that allows those suspected of terrorist sympathies to be held in custody for weeks at a time WITHOUT their families being advised of their whereabouts...AND apparently if their whereabouts are determined and discussed, then those doing the discussing may also be arrested. feel free to correct me if i'm wrong, but that's my interpretation of the legislation. which still stands.
finger-painting on the wall by india flint at 09:43 6 comments:

the purpose of life 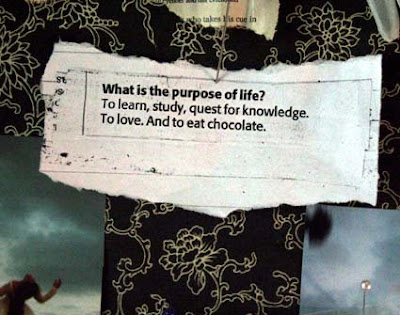 finger-painting on the wall by india flint at 07:50 8 comments: