a couple of weeks ago our national telly station kindly broadcast a 5 minute segment on your correspondent. it's occasioned quite a lot of friendly mail which has been delightful.

it's also prompted some weird comments from otherwise unknown people, who wander up to me when i'm out and about, and say things like...'saw you on the box, love your work, i'll be doing that now too, i needed a new idea'...

and of course there have been a few emails asking me to send the precise instructions for making the pieces that were shown. rather bold requests, i thought.

copying someone else's work directly is NOT a new idea. i wrote my dye book so that more folks could make beautiful colours without poisoning themselves...but i do hope that when making their textile pieces readers will apply plant dyes 'in their own handwriting' and with their own distinctive style (and of course harvested from their own "backyards").

it's been a delight to see how the work of the many students who've passed through my orbit has developed over the years....so i say (along with the French, but in a slightly different context) vive la difference...otherwise the whirled would be a dull place indeed.

have a nice day...and dye happy
finger-painting on the wall by india flint at 10:05 5 comments: 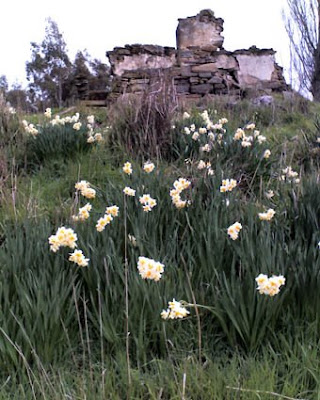 narcissus encircling a stone ruin, you'll just have to imagine the delicious scent... 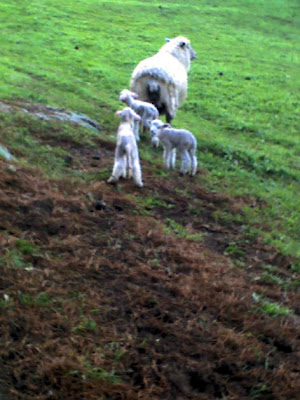 a ewe, clearly optimistic about how the season will shape up, has produced triplets. obviously she hasn't read the newspaper and doesn't realise we are about to become a desert through climate change...or maybe she just knows better! 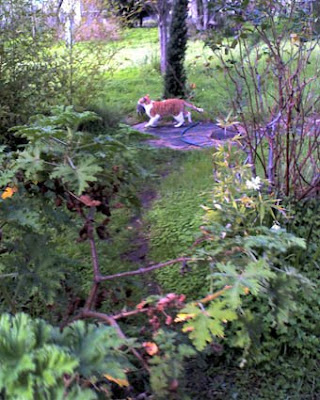 and Sam the Hunter, doing his bit for the environment by having a daily snack of wild baby bunny. clearly this is not an image for the squeamish reader. bear in mind though, that since the British introduced the wild rabbit to Australia a lot of environmental damage has been done by these otherwise delightful creatures. and I'd rather Sam caught bunnies than robins!
finger-painting on the wall by india flint at 10:46 7 comments: 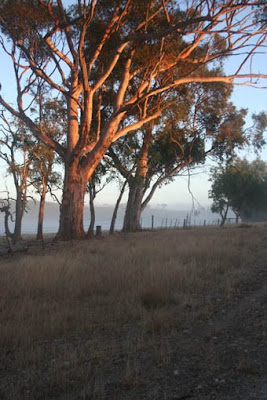 finger-painting on the wall by india flint at 23:50 4 comments:

the dignity of the dog 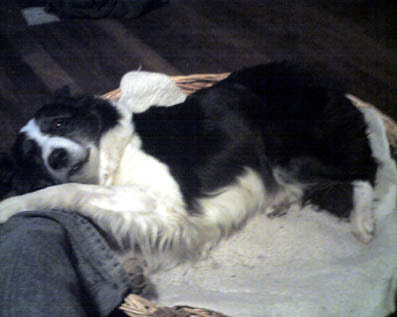 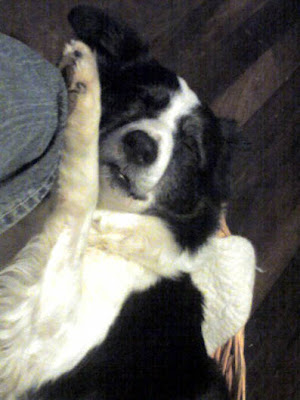 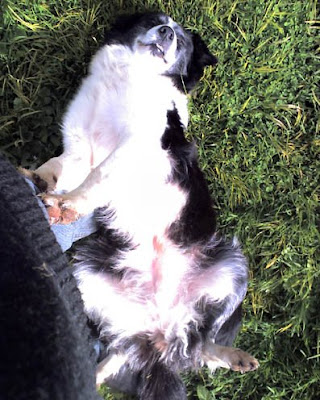 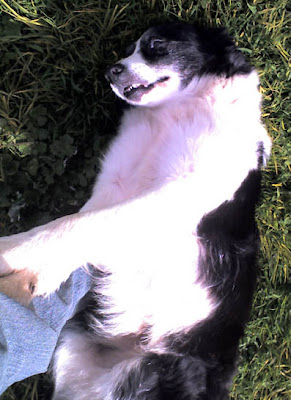 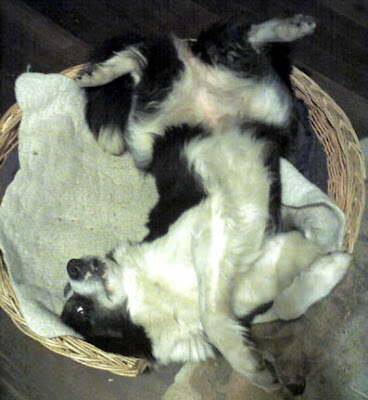 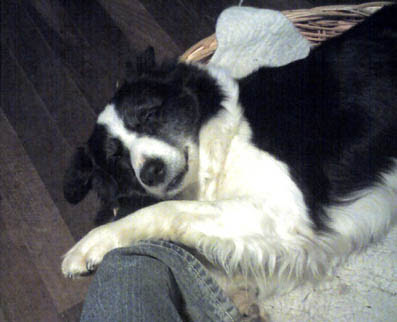 a somewhat self-indulgent post, featuring The Dog...also known as Kip the Wonder Dog. brilliant at mustering sheep on the paddock and even better at completely losing her dignity when collapsing into the dog-basket...
finger-painting on the wall by india flint at 19:57 11 comments:

here's some interesting reading for those who have been pondering the plight of the world...peak oil is upon us, they say (click on the link, it's worth it).
thank goodness we've still got a few horses in the paddocks. 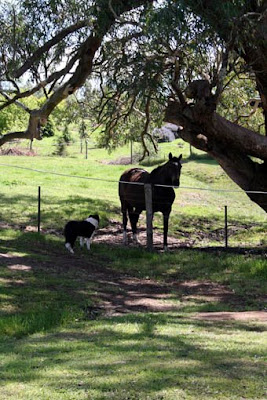 unfortunately a return to horse-powered transport is likely to bring back Dickensian conditions for these beautiful animals, as unskilled and thoughtless owners used to going where and when they want (at speed) thrash extra mileage out of them. it's bad enough seeing the tourist carriages in Melbourne being trotted thoughtlessly on hard roads; let alone the ghastly conditions one finds horses in; when wandering in Asian countries. rib-thin horses pulling sulkies at a Palace in Hyderabad come to mind, not to mention those poor Welsh ponies used for racing in Vietnam. depressing thought.
finger-painting on the wall by india flint at 09:15 No comments: 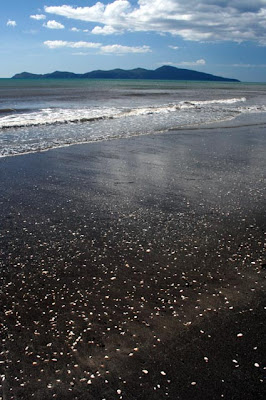 way back in January (when this blog was first unleashed) i was teaching at the Kapiti Summer School, run by Whitireia Polytechnic. i'm delighted to say i'll be back again in 2009.

not only is Aotearoa one of my favourite places, the region around the summer school campus is blessed with an abundance of flora suitable for botanical alchemy in the dyepot. it's also blessed with beautiful rivers, beaches and woods - with a magical patch of original Nikau forest

and next year will be special indeed, with a day trip to Kapiti Island (pictured above) 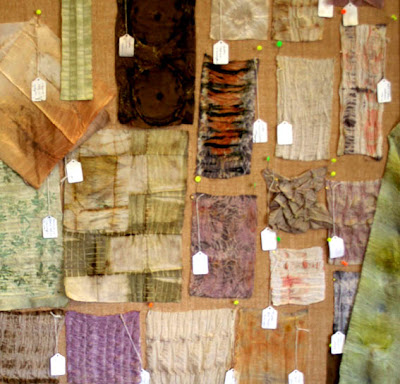 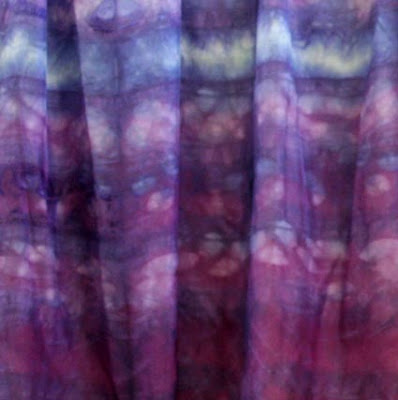 finger-painting on the wall by india flint at 09:19 7 comments:

Australia's Prime Minister Kevin Rudd was recently quoted as blaming the state of the River Murray and its associated lakes Alexandrina and Albert on climate change.

I'm sorry, but this is arrant nonsense...rainfall in the river catchment area hasn't varied enough to cause the present situation. The root cause of the lack of water in the Murray is GREED. Irrigators are pumping out as much as they can suck while the water is there...meaning not a lot goes downstream. Where's this water going? A lot of it is used to unnecessarily irrigate vines resulting in a glut of cleanskins selling for less than the bottle (that they are contained in) costs. Remember too, that when Australia exports wine a lot of water goes overseas. Water that the driest continent needs to keep at home.

Add to that the complete idiocy of Mike Rann's South Australian Government who happily let 12 Gigalitres of rainwater flow out to sea during a recent bout of precipitation while complaining there isn't enough water in the Murray to supply Adelaide's needs. Twice as much water as Adelaide needs falls on the city every year, but instead of catching it and storing it, the government whines about the Murray and commissions a desalination plant.
finger-painting on the wall by india flint at 09:57 1 comment: 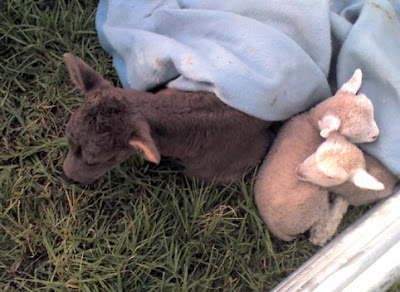 the farm nursery presently includes a wee calf and several lambs, all being bottle fed for one reason or another. while they share time in the great outdoors some nervousness regarding the calf's health has led to her enjoying nights in front of the kitchen fire, where the Youngest of the Three has been tending (the calf's) every need. what goes in must come out and requires speedy action with a bucket.

every cloud has a silver lining and so the emissions are being saved in a large receptacle (NOT in the kitchen) for the next indigo bath...
finger-painting on the wall by india flint at 09:29 5 comments: 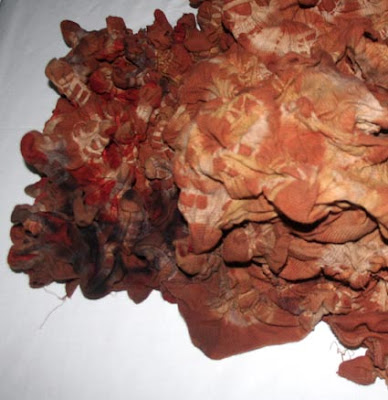 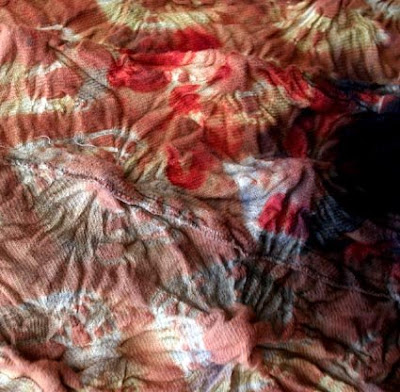 for those of you who were curious to know what emerged from the recent cauldron, here it is.
a little like a rough woollen landscape, which sadly becomes a bit of a mudslide when hung on a dummy. back to the drawing board, i think, and another attempt with a lighter weight cloth...those leprotic-looking circles were supposed to be wee pointy peaks that retained their shape! my suspicion is that this cloth has been treated with 'superwash', a process that while it doesn't inhibit dye take-up certainly plays merry hell with the other attributes of wool, particularly that one of wool remembering the shape it was dried in; vital to creating a sculpted form! 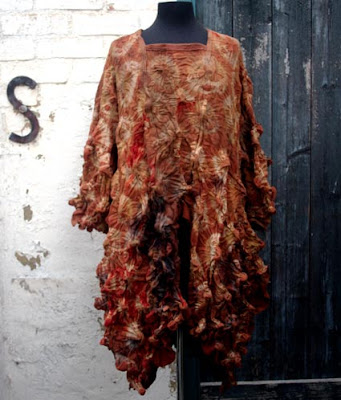 finger-painting on the wall by india flint at 10:10 2 comments: 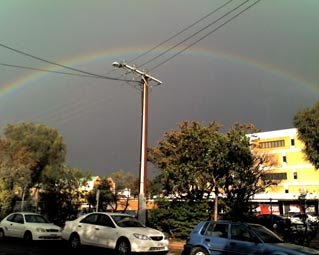 storms can lead to rainbows...and also to windfalls in abundance. a forced trip to the Big Smoke resulted in a fantastic harvest for this dyer (Eucalyptus sideroxylon, a great source of red!) 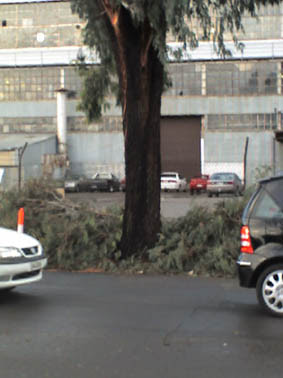 finger-painting on the wall by india flint at 17:01 No comments: