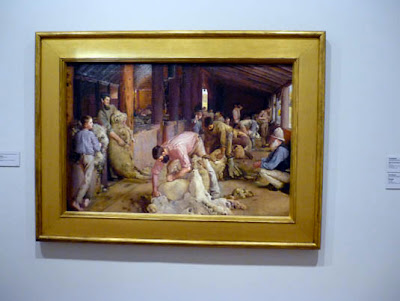 this painting is called "Shearing the Rams" by Tom Roberts. look closely at the shearer second from left.. not only is he [unusually, methinks] carrying the ram forwards out of the catching pen [it is usual to drag sheep backwards for a shearing  or crutching procedure] but the ram has been lifted bodily off the ground.
i've always found this intriguing...all of our rams are so huge that not even two people can lift the blighters. the only excuse i can think of is that at the time the painting was completed, merino rams were still quite small framed sheep.
graziers don't like to admit it but the British breeds were used to improve the frame size of the merino. typically anything NOT merino in Australia is referred to as a crossbred. this is ironic given the Lincoln and the Leicester played such strong roles in improving the merino breed.
which makes the merinos the crossbreds.
but back to the matter at hand. if that ram was of a size to be picked up and carried, then the gentleman carrying it must have been jolly strong...and perhaps vertically challenged given the suspected small size of the sheep!
finger-painting on the wall by india flint at 00:13