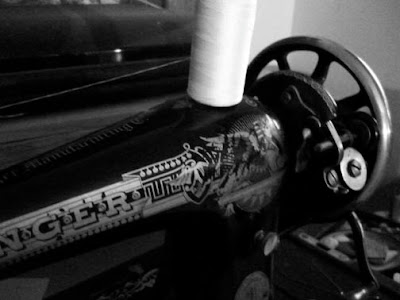 November 12th this year marks the eleventy-first birthday of my little grandmother.
[if you don't know what that means, consult your Tolkien]
the splendid word redoubtable describes her quite well. Grandmother survived typhus, cholera, the Russian Revolution, World War 1 and World War 11.
she also survived having us four wild cousins dumped on her for weeks on end during the summer holidays [truth be told only two of us were wild which meant grandmother was kept on her toes protecting the other two - no prizes for guessing to which camp i belonged. sigh].
she was also a woman of decision [a quality she passed on to her youngest daughter].
if you were given notice that the last train out was leaving your homeland in a scant hour's time, what would you take? 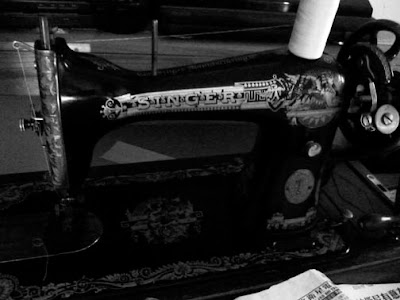 Grandmother packed up her children, a change of clothes each, a loaf of bread, a container of lard, the second-best silver [the good stuff she buried in the garden expecting to be back after the war]
and
her treasured sewing machine
imagine, my five-foot-nothing-in-her-socks [i.e. tiny] Grandmother schlepping her sewing machine across Europe to Germany.
waiting in Latvia for the Soviets to return would simply have guaranteed a one-way ticket to Siberia, where they'd already sent Grandfather having plucked him off the street on New Year's Eve 1940
in 1949 [after five years as 'displaced persons'] Grandmother and three of her five children [one had not survived infancy and the oldest was also a 'guest' of the Soviets] made it to Australia
for which i am grateful [even though i don't have a single heat-friendly gene in my body]
oh, and the sewing machine came too.
and is still in use. 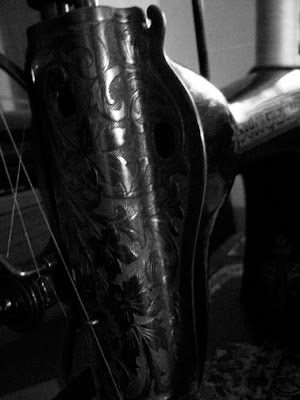 finger-painting on the wall by india flint at 08:02