while we're in image-sharing mode i thought i'd post some work from an artist i hold in great esteem. i've known Samone Turnbull since the early eighties when she and her husband together with their [then] young family were living out on the West Coast. they worked hard,raised their children, grew their own vegetables, made-do...and all the time Sam painted the world. we showed together with Rosella Palleti and Sassy Park in the exhibition 'sanctum' at the North Adelaide School of Art Gallery in 1993. i fondly recall my late grandmother Hanna Schwerdtfeger giving a brilliant opening address.
i find Sam's work exquisitely simple and refreshingly honest. she's a master of light, colour and shade and while there are recognisable influences it is never derivative. somehow she makes poetry of paint and often elevates the mundane and even difficult aspects of living with her paintbrush to create the most beautiful images.
i have a piece of her work that i traded something of mine for years ago...it's from a series she painted to illustrate a children's book called 'Furry Back and Lizard Thing'
in it a girl leans on a windowsill gazing up at the night sky while a marmalade cat [that's "furry thing"  in the story] leans up against her, looking immensely dignified... 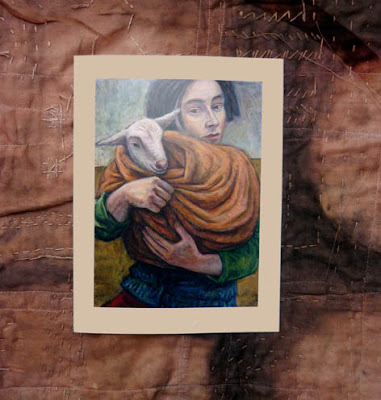 the image above [a replica of a photo] arrived in the mail in the guise of a birthday card some weeks ago.
it's called 'shepherd girl'  and is painted in acrylic on canvas, dimensions 61 x 46 cms [2007]
despite her enormous talent, Sam is a quiet, modest and even a humble person. to see more of her work have a squiz at Harrison Gallery [NSW] or visit the stockroom at Hill Smith Gallery [SA]
better still, get yourself on their mailing lists so you can see the work in person at her next show...
finger-painting on the wall by india flint at 10:06