while shepherds washed their socks by night 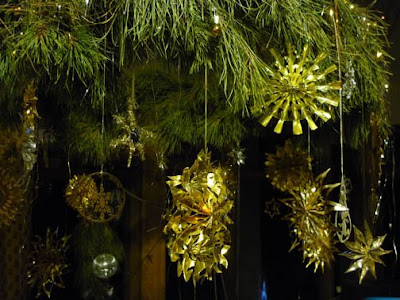 December 23 is our traditional date for Christmas-tree sourcing. In the past we’ve had lovely living ones that have been planted out once they outgrew their pots, leaving rather nice green footprints to mark various places of residence. Somehow last year there was no potted tree, so telephonic enquiries were made of the Santa Christmas tree farm, about 15km down the road to check availability and discuss prices. Having established their willingness to do business I duly pootled along in the farm ute, to be greeted by a small and spotted but decidedly unfriendly canine. I generally love dogs but this one seemed to be snarling ‘kick me, kick me’.

The welcome offered by said hound was followed (eventually)… and reinforced… by the appearance of an acne-encrusted youth of singularly surly disposition whose demeanour suggested that he was being forced to offer service at gunpoint and who made me feel only slightly less comfortable than a pork chop at a bar mitzvah.

The maculate one rummaged in the recesses of a shed, extracted a small handsaw and a measuring stick and indicated I was to participate in their self-service program. I sallied forth as instructed. The trees were a depressing sight and had clearly been pruned by someone in the last stages of dementia. I eventually settled on one and applied myself to the felling. Some 40 minutes later I was still sawing away thinking dark thoughts about ringbarking the rest of the plantation before slinking away quietly. Fortunately further contemplation brought to mind the inevitable karmic ramifications of such an act and I desisted.

Eventually as I was dragging my prize down the hill to the ute the patriarch of the proprietorial family appeared, expressing surprise at my presence and requesting considerably more cash than had earlier been agreed on. I informed him of his offspring’s unusual approach to customer service, pointed out that Christmas-tree sellers (especially those who borrow Santa’s name) really ought not to resent doing business given the time of year, reminded him of his telephonic price quote and wished him a Merry Christmas…

This year the Youngest of the Three and I were determined not to repeat last year’s mistake. We visited the national park abutting my parents’ property at Mount Lofty and engaged in the removal of an exotic weed by felling a small pine tree growing amongst eucalypts on the western slops of the mountain. Oddly it seemed to get bigger and bigger as we dragged it back up the hill towards the ute which [once the prize was loaded] assumed the air of a tree on wheels. Thus cleverly disguised as a small forest we drove home to the farm.

And even though it is in Australia now politically incorrect to publicly wish ones fellows a Merry Christmas for fear of offending immigrants who have come here from other cultures, I hope you do indeed enjoy a lovely Christmas, dear reader. Have a good one, we’ll be doing our best!

finger-painting on the wall by india flint at 07:01