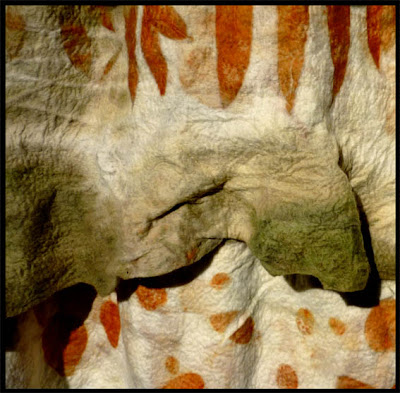 some years ago i taught a dye class in Adelaide, South Australia. this city is like the curate's egg, good in parts. some lovely parks and gardens, some appalling and desolate suburbs and arguably one of the most disgustingly flavoured reticulated water on the planet
as a child (and this is going back to the sixties) i considered the revolting stuff coming from the tap second only to that supplied in Montreal. taking a bath in Montreal as a child i remember feeling nauseous at the smell of what was essentially the St Lawrence River filtered through a stocking and laced with a considerable quantity of chlorine salts in the hope of slowing down some of the dancing bacteria. the water in  Köln (Cologne) wasn't far behind.
but i digress
South Australia's Premier Thomas Playford (who ruled the state in the middle of the last century) had clearly been bitten by the same bug and is famous for installing pipelines to suck water out of the Murray River so that Adelaideans (and a host of unnecessary irrigators) could have the water delivered to their taps. never mind that twice as much water annually falls on Adelaide as it needs to operate, which is simply allowed to run out to sea as stormwater. they consider it too nasty to drink and would rather drink a substance that has already been filtered through at least seven sets of intestines.
one of the pipes passes through our district on its way from Mannum to Adelaide. it comes up from the river flats, over the eastern shoulder of the Mount Lofty Ranges via a large concrete tank where the hunchbacked gremlins spend their lives shovelling in chlorine as fast as they can go. this putrid cocktail (remember the Murray is also loaded with agricultural chemicals, dead fish, whatever was swept from surrounding streets during the last storm, car wrecks, the grannies who couldn't afford the nursing home etc) is then pumped into the River Torrens.
the River Torrens, my friends, is our Significant River around here.
it flows through the middle of Adelaide (the state's capital) and thence out to sea. the water authority uses it as a convenient aqueduct to move their reeking brew from the pipeline to the northern reservoir, Kangaroo Creek Dam. driving along the Torrens Valley on a summer's eve when the flow is in full swing should only be done in Grandfather's World War 1 gas mask, such is the concentration of evaporating chlorine gas.
but back to the story.
at this workshop i was talking about i confidently predicted we would get a lovely red dye from Eucalyptus sideroxylon. we got bright green. pondering the reasons why, we speculated that the only strongly variable factor (given the leaves were from a source i'd frequently used and that proved red at home in rainwater and in the same dyepot) must have been the tap water we'd used for the brew.
we wondered if the Copper sulphate application that annually takes place to prevent algae from growing in the reservoirs might have had an effect. bear in mind the water levels were about half their normal capacity at the time and that the reputed 40 tonnes of pure Copper sulphate (per reservoir) is a pretty big heap in anyone's book. a reasonable hypothesis given copper is known to influence many dyes toward green.
and now to the actual point of the ramble. yesterday i decided i needed a new travel blanket for the upcoming Passage to India. i seem to make a lot of these (mostly out of fine merino jersey) but they wind up sold or (more often) simply given away. they're travel blankets, after all, and have wandering hearts.
so i cobbled together some merino jersey, added some fine felt to the edges (cos the jersey wasn't quite long enough, being a remnant) stitched some silk over the bits where La Motte had been nibbling and popped it in the dyepot. thinking red would be a cheery colour for the road.
Mother Nature had other ideas. when i peeked in the dyepot this morning, i discovered the outer bits of my bundled blanket were a lovely green. not red.
it dawned on me that the vague copperish shimmer i'd noticed on the surface of the aluminium when loading the pot with leaves had not just been pure imaginings, but had been a deposit of copper (albeit thin) on the surface of the pot.
and where did this come from?
i'd been making brews recently (from such things as stinging nettles, genista and solidago) to which i'd been adding a splash of my favourite 'green enhancer' - a brew made by soaking copper fragments in stale urine for a few years. it's a fantastic peacock/teal colour and just a few drops will often boost greens. the copper fragments don't completely dissolve, they just look a little cleaner but clearly there's enough in the solution to leave a deposit on the pot.
which was then enough to push my red brew to green.
so the theory about the Adelaide workshop is probably close to the mark.
or maybe it's just all magic.
finger-painting on the wall by india flint at 07:54