it's been an interesting month or two. life's bowled me a few wobblies including the unexpected passing of an old friend - i shan't bore you with the rest of them other than to speculate that i suppose it's the whirled's way of keeping us on our toes. in theory i should already be at the Observatory, cataloging the Solace pennants ready for installation but there are just a few more things to sort out here and then we can be off to the North in a couple of days.

in the meantime, for the first time in a very long time, i have actually cooked something from a recipe (as opposed to hurling various ingredients together and hoping they will be friends).

the formula for Lemon Delicious was kindly supplied by Mary after i tasted her fabulous pudding at dinner last week. i will confess to browning the butter in advance (remember I'm half Latvian) and to only having panela in the pantry (the recipe calls for white sugar) which threw the colour of the mix a bit but it tasted a good deal better than it looked. 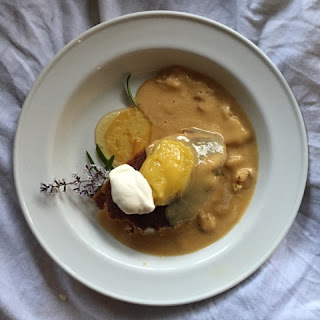 i served it with lemon butter, a translucent smear of marmalade (thank you Mary), a sprig of lemon verbena and a dob of sour cream. unfortunately when plating I wobbled with the spoon and covered the whole thing with sauce thus accidentally obscuring the lovely brown crust. it's not quite so light as the original but you know the old line about getting to Carnegie Hall...practice.

this week i also visited Treasure Ships, an enormous exhibition at the AGSA. after my recent foray into curating i was doubly awed by the work that has gone into deciding what should go where. happily for the curators, the makers of the works are long passed and thus unlikely to query the display of their work... some of the exquisite block-printed and mordant-painted cloths are affixed to the walls at well over head height and so cannot be clearly seen at all.
but that's a small quibble. 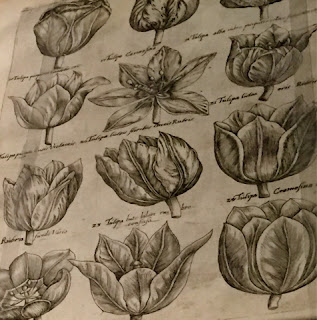 rather than paraphrasing the media release...i'll paste a bit of it in.

" The works reveal how the international trade in spices and other exotic commodities inspired dialogue between Asian and European artists, a centuries old conversation whose heritage is the aesthetic globalism we know today.

The exhibition commences with the small country of Portugal. Located on the periphery of Europe, Portugal re-mapped the West’s view of the world and created a mercantile spice empire stretching halfway around the globe during the fifteenth-sixteenth century. In 1498 Vasco Da Gama’s small fleet became the first European ships to reach India and landed with the famous words, ‘we come in search of Christians and spices’.  Within a decade the Portuguese soldier –aristocrat Francisco de Almeida (1450-1510) had ruthlessly seized control of the Indian Ocean spice trade and established Portugal’s permanent presence in Asia which was to last four hundred years.

Treasure Ships also presents the story of exploration and trade, discovery and shipwrecks, as well as illustrating the astonishing beauty of Chinese porcelain, known as ‘white gold’, and vibrant Indian textiles created for export around the world."

there's a particularly amusing Japanese painting of a group of Portuguese in which each one of the men depicted has the same enormous nose (as my companion pointed out with a small giggle). clearly the artist was fascinated by a prominently protruding Portuguese proboscis and painted it onto each face. practice makes perfect. 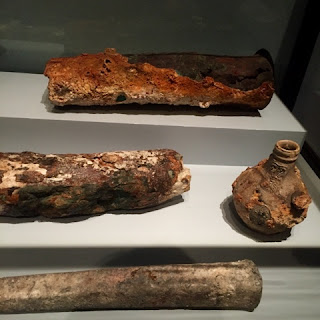 the relics above were retrieved from the wreck of the Batavia. the gunpowder canister at the top is made from copper and i can cheerfully envisage bundling cloth and leaves around it. happily it is under glass and therefore safe.

while we're talking of voyaging and wanderment i'm delighted to say the itinerary for the long-dreamed of wandering to New Mexico has been confirmed. i've been corresponding with Arts and Cultural Travel for some time now and it's looking as though some kind of adventure (but not necessarily the same story each time) with them may become an annual event. i certainly hope so.

here's the link to the very first one. (i'm told one eager soul has already signed up so that leaves 11 places)

and finally, for your amusement and because i've been getting the usual seasonal requests for internship (please let me come and stay with you so you can teach me everything you know during my summer break) and last month had rather a lot from students frantically trying to put together a conclusive body of work (i want to print leaves on my final collection, will you tell me how) and a couple along the lines of "i'm starting a fashion business please tell me which fabrics to use and what dyes and mordants you would recommend for them" (no, i'm not joking) i have been having to compose kind-but-firm letters in response.

as some of you know i do respond, albeit briefly, to questions where possible, but sometimes there just aren't enough hours in the day. Austin Kleon has gathered an amusing collection of letters composed by famous people facing far greater deluges of correspondence.
finger-painting on the wall by india flint at 10:11

Email ThisBlogThis!Share to TwitterShare to FacebookShare to Pinterest
swingtags balance, born and bred in a brier patch, breakfast of the Dogs, chance, exhibitions, food, luck is with the well prepared, the whirled, travel, USA, where in heck did i put those ruby slippers, workshops