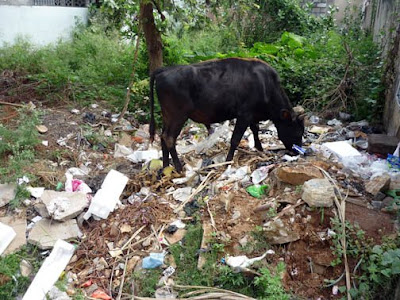 now i'm NOT trying to upset readers from the sub-continent or be culturally insensitive...but here's a thought. if the plastic non-biodregradable rubbish that drifts around India were instead collected and used as a building material the environment could become much more pleasant for all concerned.

salvaged plastic waste could also be used to stretch concrete when pouring concrete slabs. admittedly neither of these two solutions is ideal - but images such as that above are common in India. the advent of plastics pushed the traditional recycled paper packaging (that Asia had down to a fine art) aside. the streets of Indian villages and cities abound with scenes such as the one pictured.

and yes, I am aware that Australia doesn't have all the answers either. here at Hope Springs we try to re-use, recycle, re-invent or reclaim as much as possible but there are still too many things that do end up heading for the landfill.

plastic waste is an insidious problem....and apparently at least 3/4 of the worls's crude oil is guzzled by plastic production. i say wrap your goods in folded bags made from old telephone book paper, avoid plastic as much as possible and direct the few oil reserves we have left to transport needs rather than packaging...
finger-painting on the wall by india flint at 17:37