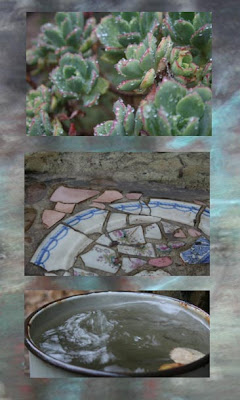 at long last awakening at 4 in the morning with water music in my ears...gentle drippings and splashings thanks to a pot strategically positioned under one of the leaks in the gutter, just outside my open window. not a lot of rain but sufficient to harvest a tankful and replenish the fast diminishing house supply.
water is a critical issue here in the driest state on the driest continent. they (those in power) keep plotting desalination plants and sucking the Murray dry (meanwhile poisoning the country with salt) instead of saving the so-called stormwater in underground acquifers. twice as much water falls on the city of Adelaide as it presently consumes. that water is directed out to sea. the funny thing is that quite a lot of punters firmly believe rainwater isn't safe to drink, and happily consume reticulated water that has collected run-off from septic tanks (as well as lots of other disgusting ingredients) on the way to the storage dams; as well as chlorine and copper sulphate. Yuk.
years ago I wrote a poem about the many words for rain. think it probably got eaten in the 1983 bushfire. quite a lot of my scribblings did. probably just as well. mother nature's radical editing at work.
finger-painting on the wall by india flint at 22:48

Email ThisBlogThis!Share to TwitterShare to FacebookShare to Pinterest
swingtags water