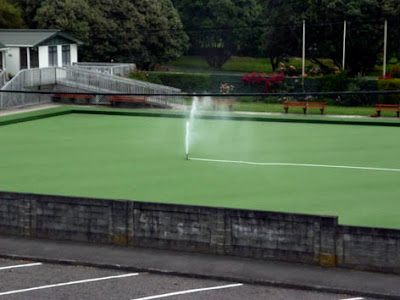 at the conclusion of last week's EcoColour workshop i was packing my gear when my attention was distracted by the sound of sprinklers clicking away....on the astro-turf at the Kapiti Bowling Club.
words fail me.
in my somewhat stunned state i wandered in the direction of Wellington and on the way was lured off the beaten path by Rachelle and Cleo 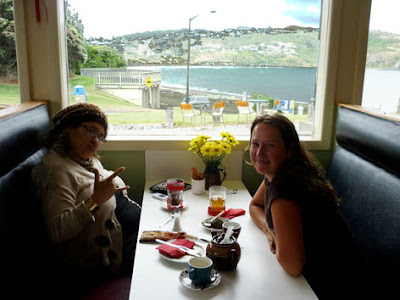 who took me to Titahi Bay and to Aunt Daisy's fabulous boatshed caff where we drank cocoa-chili tea...which was very good indeed. but when i asked where one could buy said tea the answer was non-committal. later i searched the street where rumour had it the Purveyor of Tea might be found, but no luck. grrr. it's a bit far to dash down to Aunt Daisy's when one is teaching class at Kapiti!
here's some of the wallpaper in the ablutions block... 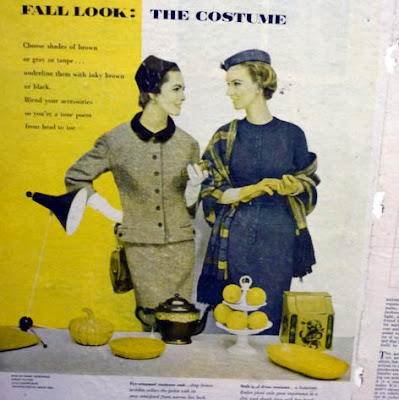 after that pleasant diversion we went for a lovely walk on the beach and then back to Rachelle's house where her beloved was minding Cleo's brood and wee Knuckles [if you've been following Rachelle's blog you'll be au fait with all this!]
i was given a small sleepy armful [Knuckles] for extended auntie time while being shown the many dyed treasures that Cleo and Rachelle had been producing.  after that we shared fish and chips and then Rachelle [bless her] took me off to Trash Palace. every town should have one. this [above] is the magical view from Trash Palace...and this [below] is what it looks like... 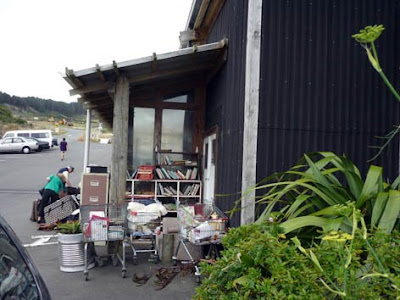 at Trash Palace treasures were found and acquired. Knuckles slept soundly despite the squeals of delight.
waking in Welly on the next day i pootled off to Te Papa Museum to visit one of my favourite paintings. actually tis a series of 8 paintings, the Northland Panels, by Colin McCahon.

McCahon and his contemporary Doris Lusk are two artists who seem to have really come to grips with the astonishing landscapes of Aotearoa New Zealand.
i went back several times over the weekend to gaze at the Northland Panels. the image doesn't do them justice - hanging in the museum, casting shadows on the wall they're absolutely marvellous.
finger-painting on the wall by india flint at 18:38