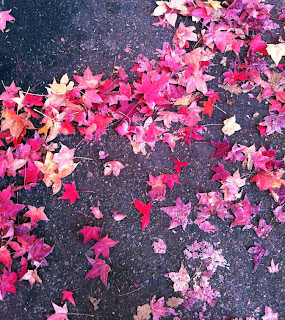 when we first came to live in South Australia
in the early 1970s
[yes, children, back when dinosaurs roamed the earth
and your mother was dodging lava puddles and errant meteors]
there was barely a tree to be found on the main street of Stirling
there was one brave oak
that marked the position of the local hamburger joint
[now a jewellery store]
and the deli next door
which some ambitious soul designated as the "Oak Tree Plaza"

due permissions were gathered
not without protest from the traders of the time who argued that it would take away parking spaces, people would be killed by running into [the trees], falling limbs would crush cars etc etc
Liquidambars were selected, not only for their glorious autumn colour but also as a fire safety measure...eucalypts are lovely trees but rather prone to explosive combustion and in the likely event the Mount Lofty Ranges are again consumed by fire
having less flammable trees in the main street is probably a good thing 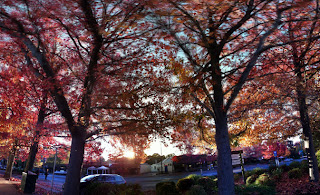 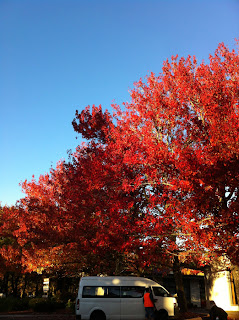 finger-painting on the wall by india flint at 07:46

Email ThisBlogThis!Share to TwitterShare to FacebookShare to Pinterest
swingtags australia- you're standing in it, life, memory, stitch in time, trees