i think it can be reasonably hypothesized that string is one of the most important inventions. how else did that piece of stone embrace the stick and become the axe? how did paleolithic princesses make their tantalizing aprons or neanderthal man keep his trousies up?

we spin ourselves a yarn, making string from rag waste, trimmed edges of cloth and those wee scruffles of thread that blossom on a cut edge of silk cloth. i have Nalda Searles to thank for giving me the gift of this technique, it is a soothing and practical occupation, and one of the few textile crafts one is still permitted to practise while in international transit - as knitting, stitching and crochet require the use of 'lethal' weapons.

the photo below shows a length by John Parkes, evoking flame trees.... 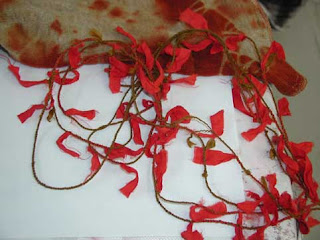 this talk of string reminds me of a story about my grandmother whose mother died having just given birth to her. grandmother was farmed out to be cared for by others and consequently did not have as happy a childhood as she might have had in the event her mother had survived. be that as it may, one Christmas Eve at the local vicarage, when presents were being handed out in the traditional manner - one for each child - grandmother was handed a large ball of wool, together with a small crochet hook. being an industrious child she set about crocheting a scarf...and as she worked her way through the ball of yarn, surprises began to appear. first a hairclip, then a ribbon, further in a small comb and gradually as the scarf grew, so did the collection of pretty objects that had been carefully wound into a beautiful bundle of surprises by the Pastor's two daughters (grown women who also ran the village school), not wishing to single out the motherless child at the moment of gifting by giving her more than the others; clearly aware of grandmother's interest in making things but also thoughtfully extending her pleasure in the gift of wool and hook with the unexpected appearance of treasures...
finger-painting on the wall by india flint at 21:08